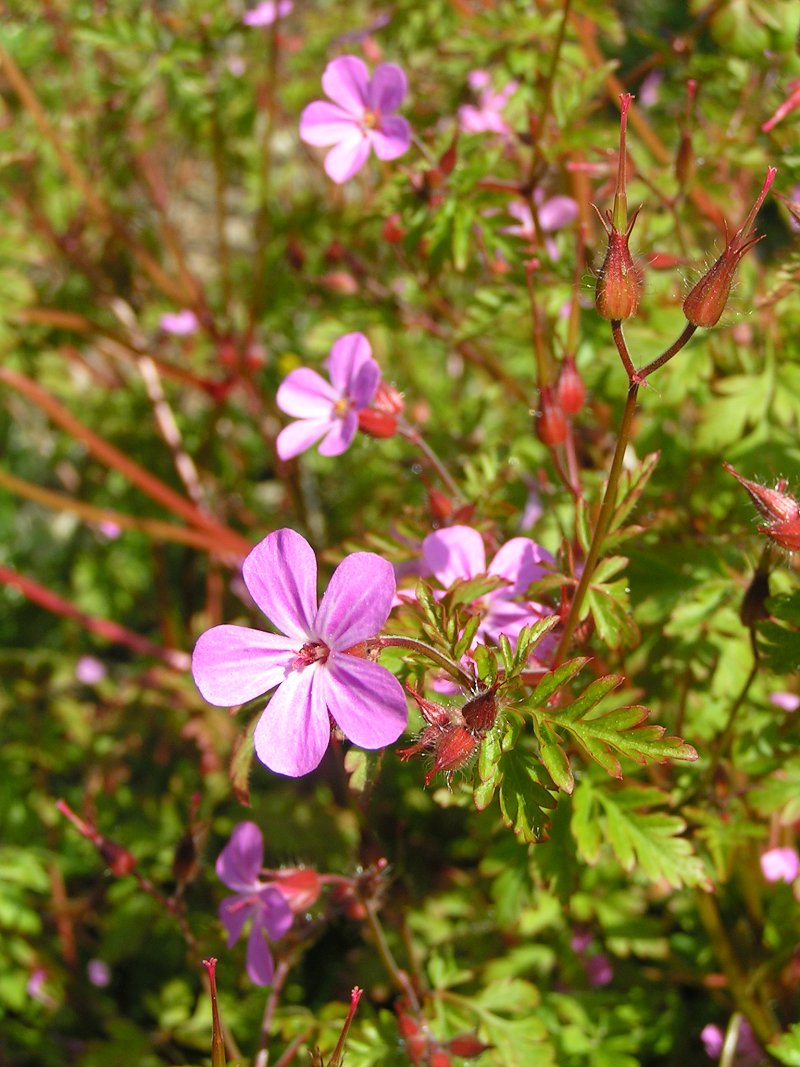 I’ve had this weed growing in the gravelled part at the front of my house for ages, and I always pull it out. But no matter how often I pull it out, it comes back, and this Spring, there it was again, grown even bigger and spread. I was about to extract it again, when I suddenly noticed that its stalks were a dark red colour and there was a bud on each stalk. Then I looked at leaves, and gradually it dawned on me that what I was looking at was Herb Robert.

I only knew this because I’d been on a wild herb walk with a medical herbalist recently, and as soon as she spotted this plant in the hedgerows, her face broke into a broad grin of recognition, and then she explained to us all the miraculous properties of this herb, called Robert after the medieval monk who used it with great success in his healing work. As I live right next door to a medieval abbey, I like to wonder whether those monks used Herb Robert and that’s why it’s still growing all around here.

Also known as cranesbill, bloodwort, red robin, and felonwort ~ some herbalists also refer to Herb Robert as a ‘forgotten treasure’ partly because it is one of those herbs that has multiple uses in terms of its health giving properties, but also, and not least, because it has been found to be helpful in the treatment of certain forms of cancer and also in boosting the immune system.

Research has found that Herb Robert is a source of germanium, and germanium has a special role to play in the body because of its unique ability to make more oxygen available to the cells. More oxygen, at cell level, means the body has the opportunity to fight disease by its own powers, and healing can take place quickly. But if the cells experience a lack of oxygen, they cannot get the nutrients, to regenerate. Those cells then become anaerobic, the state that leads to pain, disease, wayward cells and cancer.

Dr. Otto Warburg, twice Nobel Prize winner, said in 1966, “The prime cause of cancer is lack of oxygenation of the cells”. He discovered that cancer cells could not exist in the presence of abundant oxygen, but only in an anaerobic state.

So because oxygen plays such an important role in cell health and immune function, using Herb Robert regularly can be something really practical we can do to prevent cancer.

I’ve been making tea with it ~ which is quite nice, a strong, golden colour and tasting a little bit like ginseng tea.

I’m also a great believer that if a herb keeps reappearing, despite trying to remove it, it probably has a message for me at the very least, and more likely, has properties needed for my own health. In other words, it’s personal!

But Herb Robert is known to medical herbalists as a good all-rounder and preventative tonic because of germanium.

Germanium’s remarkable effects on the immune system are well known in medical fields. It has a good reputation as an energy giver, immune builder, and as a powerful therapeutic and preventative, and also as a vigorous adaptogen, acting to rebalance minor or major health imbalances in the body.

Germanium provides antibiotic, antiviral and antioxidant help which is all the more important nowadays when our bodies are having to cope with so many different kinds of pollution from different sources.

So why not look out for it? It’s very pretty, with its purpley stems, and hard to miss with its crane bill, furry buds and delicate pink flowers. And the leaves are like tiny ferns, which you can chop up and put in your salad.

Shop GMO Free in the UK

With the Shop GMO-Free app at your fingertips, you’ll be able to join with us, to ‘persuade’ food manufacturers to help us regain our food sovereignty, to use our right to decide what sorts of foods they should be supplying us with, in a language they can understand. In other words, we can vote with our shopping baskets!

With this app, it couldn’t be easier – it’s the no hassle way to buy foods for yourself and your family that are guaranteed by their manufacturers to be free from GMOs and from products from animals fed on GMO-free feed.