Colin Kingshott and his company, Florachology, are at the cutting edge of our burgeoning understanding about how sound heals, and we at The Therapy Book are proud to be in association with him. Colin has been researching the songs of the flowers for decades, to find out how Nature uses sound resonance and vibration to heal on a multitude of levels, and we’re pleased to produce this new video for him, the Song of Daffodil.

I found it to be incredibly mentally soothing and uplifting, all at the same time. Colin says that the song of the daffodil can be helpful to those with dementia, coming as it does from the narcissus family which contains galanthamine, used in dementia medications. As Colin says:

“You may have heard the ancient Greek myth about Narcissus – the gods caused him to fall in love with his own reflection in a lake. He is always found gazing into a mirror of water, and so there’s a correlation here with the strong gazed looks of people with dementia, who appear to be lost in their own thoughts.”

He says that each plant, flower and herb has its own designated time of the day to sing, and the daffodils’ choir can be heard by those who have sensitive hearing, like Colin, between 6.00 pm and 8.00 pm. One wonders if that was that choral resonance which appealed, even subliminally, to the 19th century poet William Wordsworth, as he wandered lonely as a cloud over the hill and suddenly “saw a crowd, a host of golden daffodils, beside the lake, beneath the trees, fluttering and dancing in the breeze.”

“I gazed… and gazed…but little thought
What wealth the show to me had brought.”

By watching and listening to the Colin’s Song of the Daffodil, you can hear its growling, gravelly “voice” at any time, and I’ve certainly been feeling the benefit of its gently soothing and inspiring qualities while helping to make the video. Since working with this CD while putting the pictures of daffodils together for the track, I’ve found, like Wordsworth, that just before going to sleep at night …

“They flash upon that inward eye
Which is the bliss of solitude.
And then my heart with pleasure fills,
And dances with the daffodils.

The strong vibration you hear at the beginning of the track are the daffodils “singing”, but then Colin fades that down into the background beneath some beautifully dreamy music superimposed on top. Even though you won’t be so aware of it, the song of the daffodil will still penetrate your hearing and your being.

The sound of the wild daffodil ranges between the notes C E F G A B – and the morphic note is A.

Here’s the poem in full:

I Wandered Lonely As A Cloud

I wandered lonely as a cloud
That floats on high o’er vales and hills,
When all at once I saw a crowd,
A host, of golden daffodils;
Beside the lake, beneath the trees
Fluttering and dancing in the breeze

Continuous as the stars that shine
And twinkle on the Milky Way,
They stretched in never-ending line
Along the margin of a bay:
Ten thousand saw I at a glance,
Tossing their heads in sprightly dance.

The waves beside them danced; but they
Out-did the sparkling waves in glee:
A poet could not but be gay,
In such a jocund company:
I gazed–and gazed–but little thought
What wealth the show to me had brought:

For oft, when on my couch I lie
In vacant or in pensive mood,
They flash upon that inward eye
Which is the bliss of solitude;
And then my heart with pleasure fills,
And dances with the daffodils.

Here’s the video of the Song of the Daffodil:

For comprehensive information on more than 200 holistic health therapies in an easily understandable format, buy The Therapy Book for Kindle at Amazon.

Available in Amazon’s Kindle store, just click on the book below: 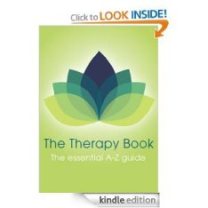