In my book Reclaiming Sovereignty: Shamanic Earth Magic, I explain about the shamanic relationship between humans and the spirits of the Land,  and about how shamans long ago worked with their own indigenous spirits to support the fertility and Sovereignty of the Land.

It is from that loving partnership between Man and Fae that the Sovereignty of the Land is derived, and shamanic sex rites are key to Sovereignty. Going back thousands of years into history, the right of Sovereignty was passed on to the newly crowned king during sex rites.

The new king would spend the night of his coronation experiencing shamanic sex magic with a specially trained sacred hierodule or priestess of the temple. The transmission of the Sovereignty of the Land took place in this way, coming through the hierodule to the king. That’s why sometimes we hear the expression that the king marries the Land, although these days, the powers-that-be consider it sufficient for him to marry a commoner, as in the marriage of Prince William and Catherine Middleton.

So there are a few shamans who continue to maintain that relationship between Man and Fae, and in this article, I will go further into how this is done, and also tell you about a ceremony which I conducted on the winter solstice, Sunday December 21st2014, in Glastonbury, Somerset, to mark a culmination in my own work.

But let’s start at the beginning.

Discovering the spirits of the land

I first began to learn to work with the spirits of the land within the first year of my shamanic training, about 10 years ago now. I found that once I started journeying – which is the word we use for going into trance with the purpose of meeting the spirits in other dimensions – my everyday perceptions changed.

Previously, I had been just like everybody else in the commuter town of Sevenoaks, too busy rushing to the train in the morning to even notice the wonderful old trees lining my way, or too tired in the evening to appreciate and give gratitude for the extraordinary beauty of the sun setting over the North Downs.

However, once I began shamanic journeying work, it was if my perceptions changed and I began to see spirits everywhere and in everything. The trees began to appear to me as kindly and courtly old gentlemen who had so much to teach me. I remember once putting my hand on the trunk of one of the oak trees, and asking him to heal me of my deep sadness and grief, and within seconds he just pulled it up through my torso and along my arm into his trunk… and it was gone!

I also began to notice how the contours of the landscape seemed to resemble sleeping giants, and I started to see the curvaceous North Downs as my spiritual mother who had been feeding me from birth with her milky, chalky water.

So much did I relate to Nature as alive and buzzing with Spirit that a few days before I left Sevenoaks, to move to Glastonbury, I looked out of my window to find all the trees waving their branches goodbye to me, and I was so moved that I cried. Of course, a rationalist would say it was just a windy day… but I was no longer a rationalist, and had no intention of becoming one ever again!

On moving to Glastonbury, there was a whole other experience in store for me, for I soon learned that the spirits of the Land here are different, and that in fact they are different wherever you go. There’s no globalism among spirits or talk of we’re all just One, man. They’re not all just One! Just as specific plants grow and thrive in specific conditions, so I found that there are certain, different types of spirits everywhere, and so I had to get to know these new spirits in this part of the world.

The best way to learn how to work with these spirits is just to get out there on the Land and do it. Over the past four years, I’ve worked sometimes in groups, sometimes in pairs but more often alone. I go into trance to make contact with the spirits, and I also create alchemical spagyrics to use as offerings, according to the messages and metaphors that are flying between us.

For instance, a lot of my work in the past few years has been centred around birthing a Dreaming Seed through the auspices of the Alchemical Marriage. The Alchemical Marriage is also known as the Marriage of the Sun and the Moon, and so I would make two different spagyrics with the relevant herbs – one with a herb governed by the Sun, the other by the Moon.

I use these alchemical offerings to sprinkle around in ceremonial work.

What is a shamanic ceremony?

The purpose of the shamanic ceremony is to anchor the journeying work already carried out in the other dimensions into this Earthly one.

The most important thing to know about shamanic ceremonies is that they are usually not anything like those practised in High Magic circles. They tend to be much more relaxed because they come from an older, indigenous tradition in which the whole tribe would turn out to enjoy them – children, dogs and all. It was often the only form of entertainment.

Shamanic ceremonies can be elaborate and formal, of course, but they are usually fairly informal and relaxed.

Once everyone has formed themselves in to a circle, I call in the spirits from the seven directions – north, east, south, west, above, below and centre. I usually drum too, to build a vibrational architecture of sound which creates the sacred space. It’s just a bit like cleaning your house before guests arrive. You sweep out all the dust and dirt, so that they can feel comfortable.

You can have a small fire, or just burn incense or herbs in a bowl with some charcoal. Fires are useful if the purpose of your ceremony is to do away with all that no longer serves your highest interest. You can write on a piece of paper whatever it is that you wish to divest yourself of, and throw it into the fire. In my experience, it works every time.

Once we sense that the spirits have arrived, we put on a little show for them, using drama, dance, music or singing … especially what are known as ‘power songs’. These are songs which tend to come out without any kind of planning. They are usually a gift from the Other Side and are invariably incredibly beautiful, in an otherworldly sort of way, and immensely healing. Sometimes, the Spirit of the Drum can arrive in the middle of the drumming, and when he does, you know it!

But I think it’s important that shamanic ceremonies are enjoyable, because it is a form of thanksgiving or offering to the Fae, and they’re hardly likely to be able to resonate with our love and gratitude if we’re too stressed out about getting it right to show it.

Now that I’ve explained the importance of the shaman working with the spirits of the Land, and described something of what a typical shamanic ceremony is like, I’d like to invite you to one, if you’re in the area around the time of the winter solstice.

The Birth of the Radiant Child

The Radiant Child is one of the effigies on the landscape Faery Ring here, on the Somerset Levels in England, which some interpret as a ‘zodiac’. In this vision, inspired by the work of Coleston Brown, the effigies are not astrological signs but faery characters. To me, they represent the magical lore underlying the story of Merlin and The Thirteen Treasures of Britain – symbols for the Sovereignty of the Land.

In this ancient Welsh myth, Merlin goes to King Bran to ask him for The Thirteen Treasures of Britain – in other words, the Sovereignty. Bran then puts Merlin through a number of trials, similar to those of Hercules. Merlin completes them all successfully and so he is awarded all The Thirteen Treasures and he brings them to the Glasshouse (Glastonbury) for safekeeping.

These thirteen effigies on the Land are characters in a story of the Divine or Alchemical Marriage between the Faery King and the Faery Queen on the first full moon after the Spring Equinox. This results in the birth of the Radiant Child in the Faery Boat at sunrise on the Winter Solstice, which we will celebrate on St Edmund’s Mound in Glastonbury, just as the sun begins its slow climb up the Tor.

As Above, So Below – the story told in the sky is mirrored on the ground below, so we  marked the celebration of the birth of the Faery Child three times on the day of winter solstice, 21st December.

The Glastonbury Declaration was read out on the Winter Solstice 2014 to affirm the Sovereignty of this Land. 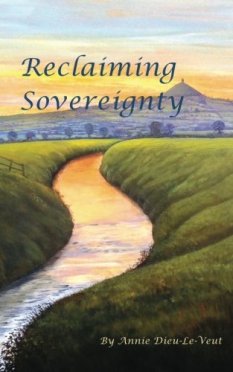 When the people of Britain voted to leave the European Union in June 2016, the word on everyone’s lips was Sovereignty.

But what is Sovereignty?

All of those pundits were wrong – although they were hardly to blame for their errors. Sovereignty actually starts off life as a spiritual transmission from the spirits of the land, but this is no longer taught to the general populace.

However, a few mystic types did know about Sovereignty, and so they weren’t at all surprised when its spirit rose up from the land on the Summer Solstice of 2016, and infused the hearts and minds of the ordinary people of Britain.

In this book, Reclaiming Sovereignty, you will learn all about the spiritual source of Sovereignty – and how to find it and reclaim it in your own life and on your own land.