Author of The Sacred Sex Rites of Ishtar

One of the greatest challenges that I’ve found in writing my books are the love scenes. They’re not exactly Fifty Shades of Grey – but I do linger on romantic liaisons a little longer than is polite, and so your specs might get a bit steamed up!

However, I’ve found portraying them accurately a challenge to my sense of privacy, because you have to write from experience if it’s to ring true. I have to take my courage in both hands, to open up and reveal this secret part of my being to complete strangers. Added to that, there is the complication that these are not love affairs between mere humans on Earth, but beings that inhabit different dimensions.

I’ve always found that the sexiest part of love making is just before the actual act; when the passions are building between two people and they feel as if they are entering an enchanted world. This is because they are entering an enchanted world – it’s not just imagination. After all, Mother Nature’s purpose in making the act of sex so deliciously pleasurable is ultimately about Her survival. So why wouldn’t She take an interest and show up, with her faery midwives, for such an auspicious event – even if it is only a quick bunk-up behind the bike sheds?

However, I zoom in further and longer in order to capture, like a film-maker, the unexpected emotions that can shoot out, in a Tourettes-kind of way, and which often take both parties by surprise.  It’s similar to what happens to a woman just before giving birth. In my own case, the nurses laughed when I got really angry just before giving birth to my daughter because it’s a recognised sign that the baby is well on its way.

Scientists would no doubt attribute that anger to a certain mix of hormones, but that just tells us about the ‘how’; it’s not the ‘why’. The ‘why’ is, according to my understanding, that Nature’s fiery “red in tooth and claw” fierceness can no longer be held down by Victorian drawing-room social niceties and it erupts like a raging Vesuvius, in order to protect the young.

Like the time, for instance, when I accidentally stumbled upon a baboon who had just given birth, in Botswana. She was just in the process of licking the afterbirth off her newborn. I instantly stopped dead in my tracks and then quietly retreated. I’d caught the wild, mad glint in her eye and I knew she wouldn’t be taking any prisoners.

Anyway, lovemaking and childbirth are just two ends of the same nine-and-a-half months process and at such auspicious times, both parties enter into a magical other-dimensional realm in the Middle World that some call Faeryland.

By the same token, that’s why there’s no such thing, in reality, as ‘free love’. Love is never free and everybody pays, eventually, one way or another. Despite Hollywood’s best efforts at mind programming us since the Sixties with comedy series like Sex in the City, the truth is that sexual intercourse is not just a cheap thrill of a fairground ride that we can enjoy and then jump off, with no consequences. When we make love with our partners,  we are conjoining our two bloodlines, and this is of great interest to the ancestral spirits. Maybe that’s why Carrie and her other New York friends were always so unhappy and unfulfilled?

But it wasn’t that way in the past. Some indigenous tribes that haven’t yet lost touch with their shamanic roots believe that the ancestors bring together the chosen man and the chosen woman when they want to send a certain soul through into human life and combine the bloodlines. It’s the ancestral spirits who drop the Puck-like love drops in the eyes of the Beloveds, which is why, I guess, they say that love is blind. It certainly does appear to be! 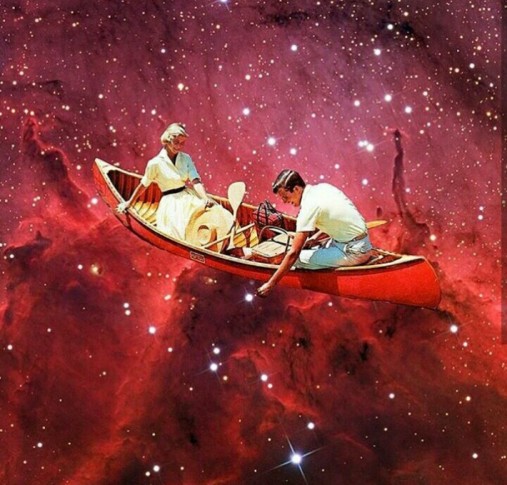 In the case of my lover characters, my aim is to show how it’s the woman’s role to protect her own sovereignty and thus the Sovereignty of her race.

I think this is why some in America are already beginning to talk about a Trump babyboom, with all the promise of a wall and stricter security measures being put in place on the borders.

It’s a fact of Nature that unless a man is prepared to defend the nest in times of danger, her eggs dry up. It isn’t that the woman is necessarily being picky, contrary or moody – although she may be also all of those. But she’s really just obeying Mother Nature when she doesn’t want to have a sex with her man when he’s showing no inclination to fight for her, for their children and for their way of life.

Refusing to defend your borders will cause many women to close their legs, tight shut  – because their bodies are telling them that it’s too dangerous to bring children into the world.  It’s natural selection at work.

A good example of this form of natural selection is found in Nature, with the flamboyantly-coloured Australasian bowerbird. He doesn’t rely solely on his vibrant plumage alone to attract a mate.

The bowerbird takes a long time to build his love nest because it’s made up of lots of different intertwined boughs, creepers, flowers and leaves – as many as the bird can find to attract the female.

“Bowerbirds have also been observed creating optical illusions in their bowers to appeal to mates. They arrange objects in the bower’s court area from smallest to largest, creating a forced perspective which holds the attention of the female for longer. Males with objects arranged in a way that have a strong optical illusion are likely to have higher mating success.”

Nature is the Mother of Invention, because the female will only mate with the bowerbird who has made the most effort with his nest. His commitment to such an endeavour is the only indication that she can glean that her progeny will thrive and be safe and secure with him.

So men, if you’re wondering why things have been pretty flat in the bedroom lately – there’s a fast way to get it all moving again.

Help Trump build that wall and defend the borders!  Then you’ll be able to enjoy a thousand-and-one enchanted nights again!

Get The Sacred Sex Rites of Ishtar on Amazon.com #ad

Get The Sacred Sex Rites of Ishtar on  Amazon.co.uk #ad