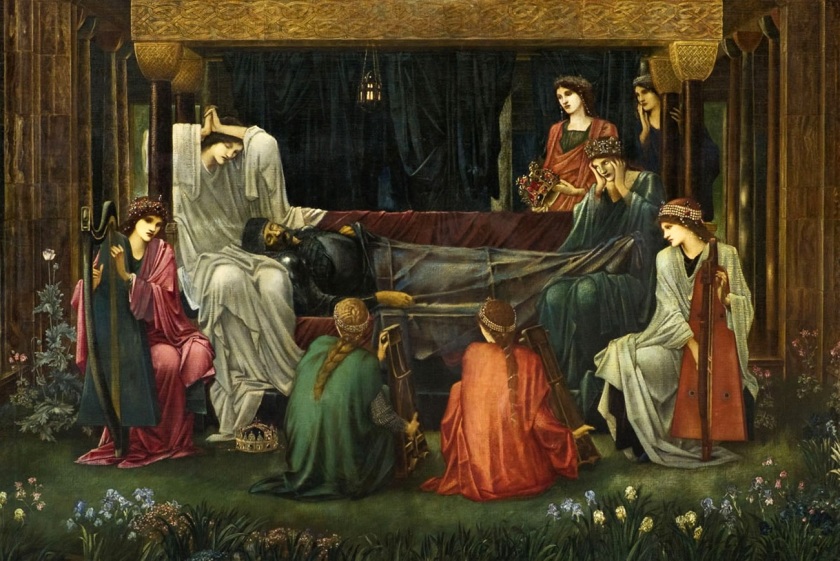 We’re all familiar with the tale of how a wounded King Arthur Pendragon was carried in a boat by Morgan Le Fae to the Land of the Dead in Avalon. But we may not realise that this is just a tiny fragment of a much longer and more ancient wisdom story about how our hero battled the elements in the starry, stormy firmamental seas to win the hallowed Cauldron, otherwise known as the Holy Grail.

It was the Norman scribes in the 12th and 13th centuries who allowed that fragment to remain in the consensual consciousness, to encourage the belief in the minds of the “difficult” Celts – who were always threatening revolt – that their Arthur was dead. It was for the same reason that, around the same time, the Benedictine monks exhumed “Arthur’s skeleton” from the grounds in Glastonbury Abbey. It was all just part of a propaganda exercise to create a politically convenient pseudohistory by persuading the masses that a metaphorical figure was actually a historical personage who had now passed on from this realm.

In this way, the mythical Mists of Avalon became a useful cognitive curtain preventing further exploration. However, when we push through that mind fog, we can excavate the full original saga to find a thrilling, heroic, mythic tale that reinvigorates the spirit of Arthur which we all hold dear in our dreaming fields, and who is currently rising in our hearts again.

And when we engage with the Celtic knot weave of this tale shamanically, we can then understand the real meaning of the Holy Grail and recast our vision of Merlin’s Round Table of Twelve Knights as astronomical and astrological.

This extract shows how the Normans understood the true wisdom teachings that were hidden in the ancient stories of the Druids.

The Round Table was constructed, not without great significance, upon the advice of Merlin. By its name the Round Table is meant to signify the round world and round canopy of the planets and the elements in the firmament, where can be seen the stars and many other things.

In other words, the oldest of these stories about Arthur and Merlin are stories written in the stars and woven through, in their underlayers, with golden threads of wisdom about cosmological truths that may sleep in our subconscious minds for many lifetimes, but never die.

… old legends are far more than whimsical fancies from superstitious ages. These legends were originally intended to carry information from generation to generation. The symbolic language of these songs, stories and poems was designed to adapt itself to changing times and attitudes.

Hamish Miller and Paul Broadhurst in The Dance of the Dragon

The story of the heroic Pendragon may be acted out in the stars, but we are made of star stuff, and so the same cycle is played out within the Waters of Avalon deep in the darkness of our own inner space. That is why it is said that when Britain is in the direst peril and needs him the most, Arthur will arise from his watery “grave” and return.

As Above, So Below

The hidden knowledge about this spiritual force comes from bardic poems that hail from of an age that Time forgot, when our ancestors carved stories about the Once and Future King where the stars “fell to the Earth” in the green and pleasant hills of Avalon, and then left them there for the salvation of mankind.

These esoteric dramas are as rich and fertile as the black peat laid down in the soil of those salt marshes and flower-filled meadows because they are threaded through with deep spiritual teachings that come from gentler, slower days …when both treasure and pleasure were measured by meaning and a man’s dreams were valued more than gold.

Their deeper significance is only visible to those with the eyes to see – of which there are few today. Yet they are still faithfully acted out, every night, by huge earthwork giants on a massive stage that is lit by stars shining down into an oft-flooded cauldron-shaped landscape reminiscent of the Holy Grail.

And they star a hero named Arthur who is the protective spirit of Sovereignty of the Isles of Britain, the one who ignites the British spirit which is famous all over the world for its intelligence and creativity.

The Mysteries of Avalon

In my book Stories in the Summerlands, I explain how the 20th century magician Dion Fortune invoked the spirit of Arthur in her Mystery Teachings, which she held in the Chalice Orchard on the lower slopes of Glastonbury Tor.

At the time, the Qabalah Tree of Life was a popular cognitive mapping device among those who belonged to the secret societies, like the Rosicrucians and the Golden Dawn. So she mapped the Arthurian mythos on to it, as follows:

She attributed the stern battling king, 5 Geburah (red, Mars), to Arthur, and the merciful king, 4 Chesed (blue, Jupiter), to Merlin.

In this way, the two kings – Arthur (stern) and Merlin (merciful) – hold the balance of the weave of the body politic between them. When Chesed’s quality of mercy becomes overstrained to the point of pathological altruism, the nation becomes weak and thus vulnerable to attack. So it is then that the sterner Geburah has to step in to restore the equilibrium, to protect the Sovereignty.

There is a lot more to the Mystery Teachings of Dion Fortune, and I unravel it all more deeply in Stories in the Summerlands: A pilgrimage into esoteric Avalon. In the same book, I also restore the much older tales about Arthur and Merlin, in order to help reinvigorate the true spirit of the Once and Future King so that he can “rise again” in our collective consciousness and inspire and rejuvenate our national morale today.