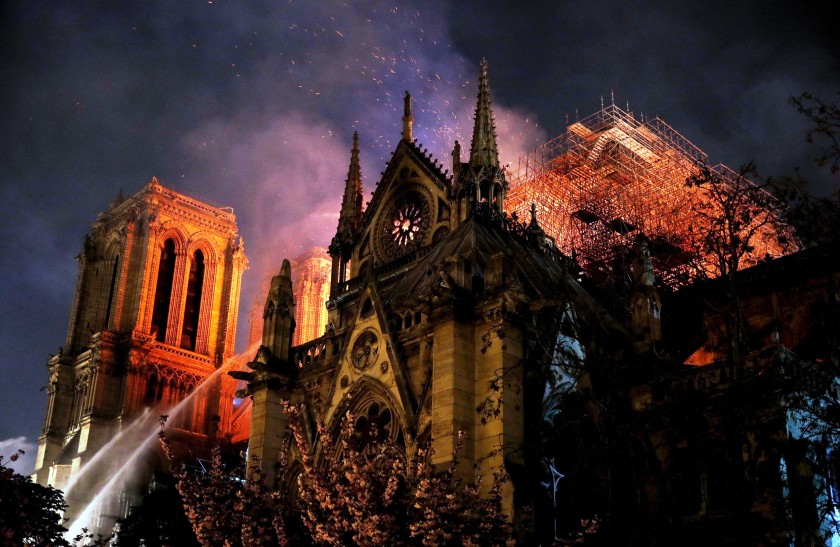 The term the “Great Art” comes from medieval times and it refers to the art of alchemy, which has, at the heart of its raison d’etre, the many-stepped alchemical process that culminates in the Philosopher’s Stone which turns all it touches into gold. The science of alchemy found a way to use various forms of art – by which I mean stories, paintings, sculptures, music and dance – to preserve itself in the Age of Reason that came in after the so-called Enlightenment of the 18th century, and which is still forcing us to live in a sort of Dark Age today.

By abstracting the spirit from base matter, modern science has thrown out the baby with the bath water – the baby being the Child of the Philosopher, which is another term that alchemists used for the Philosopher’s Stone.

These kinds of artworks, that have deeper allegorical meanings, are found, even today, in hundreds of churches and cathedrals which are, in effect, splendid and immense Gothic picture books, all illustrating stories which describe the steps up the Ladder of the Wise, in other words, the processes of spiritual evolution that culminates in the Philosopher’s Stone.

This use of ecumenical structures to preserve such a message is not heretical or sacrilegious because it was understood that the First Matter to be put into the crucible of human existence is the human being itself, and this journey towards redemption, reincarnation and revelation, up the Ladder of the Wise, is the story of the spiritual evolution of man which is found in many ancient myths, and even in the gospels. In other words, these churches and cathedrals are Trojan horses for the Great Art that exemplifies the true pilgrim’s progress – and thus the meaning and purpose of human existence.

The Gothic cathedral, the sanctuary of the Tradition, the Science and the Art, should not be regarded as a work dedicated solely to glory of Christianity, but rather as a vast concretion of ideas, of tendencies, of popular beliefs; a perfect whole to which we can refer without fear, whenever we would penetrate the religious, secular, philosophic or social thoughts of our ancestors.

The Mystery of the Cathedrals, written by the French 20th century alchemist Fulcanelli, is not about a mystery which is like a detective story, although you do have to be something of a detective to figure it all out. But no, he is referring to the Mystery Teachings, which one enters into as an initiate, a student in the wisdom teachings of the ancients, to learn what human life is really all about.

Some believe the word “Gothic” to have derived from the Goths, an early medieval Germanic culture. However, Fulcanelli tells us that this is a misunderstanding which has come about through ignorance of the secret language used by Mystery initiates, otherwise known as the “Green language” (langue vert). He points out the similarities between the word ‘gothic’ and ‘goetic’, which means Kabbalistic magic, and says he believes that the term ‘gothic art’ is slang for argotique, the Hermetic descendant in the langue vert of the “argonauts” of Jason, the voyage of whom in Greek myths is an allegory for the stepped process of the Ladder of the Wise.

Another expression in the langue vert for initiates is “labourers” who practised “celestial agriculture” – in other words, they “ploughed” the wisdom of the stars.

There are many such great labourers who embedded their stories of their works about celestial agriculture with symbols and metaphors, too many to list here.

But unfortunately, the word ‘art’ has become so utterly debased today that it has come to mean any sort of infantile, primitive daubing purporting to represent the objects perceived by the five senses. However, it seems to me when art is just about making a copy of outer reality, they might just as well use a camera, because it will make a much a better job of it. Even modern abstract art, with its pigments sprayed willy-nilly up walls, unmade beds and formaldehyde-mummified carcasses, is a bastardisation and thus a mockery of the Great Art. It has no message and therefore no meaning.

An example of the langue vert

The picture above is of a bas relief from the Great Porch of Notre Dame Cathedral in Paris, France, a gloriously sublime erection, built in 1160 CE, that is so choc-a-block with alchemical symbolism that one can only wonder why the iconoclasts of this Dark Age took so long to try to burn it down.

Seated on a throne to represent Sovereignty, with her head in the clouds, she holds in one hand the sceptre of royal power, and in the other two books: one is closed (representing esotericism) and the other is open (representing exotericism).

She represents Mother Nature, who is the ultimate teacher of alchemy. The Ladder of the Wise is running up the centre of her body to show the course that the energetic serpents take on their way to ignite the enlightened state of the initiate which is the Philosopher’s Stone.

In my book, Stories in the Stars, I break down in simple terms the journey of the human being up the Ladder of the Wise, and show how this same blueprint is found running through many ancient myths, including that about Jason and Argonauts. Once we understand this passage of the hero, we can apply it to help guide us through our own lives today.

In Stories in the Summerlands, I reveal, in plain language, the alchemical and astrological underlying story found in the gospels to show that the birth, life, death and rebirth of Jesus Christ is about the alchemical journey of the human being to become the Child of the Philosopher.

In The Sacred Sex Rites of Ishtar, you can learn more about the energetic serpents and how to get them to fire up your own enlightenment and thus your progress up the same Ladder of the Wise shown in the bas relief of Notre Dame cathedral.