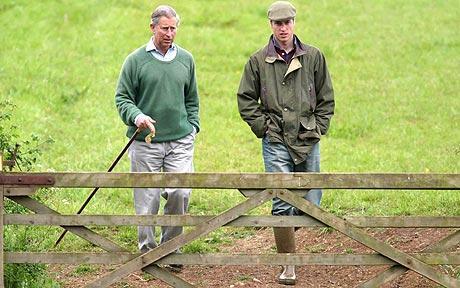 There aren’t many times you’ll find a farmworker advocate, a poet, an organic-farming senator, and British royalty all in the same room. But if you happened to attend the Washington Post’s Future of Food Conference recently, that’s exactly what you would have seen.

A variety of food activists, ranging from author Eric Schlosser (Fast Food Nation) and poet/environmentalist Wendell Berry to the cofounder of the Coalition of Immokallee Workers, an advocacy group that protects the rights of migrant farmers, and His Royal Highness the Prince of Wales, convened to talk about the long-term survival of the world’s food supply and how our current industrial food system is poisoning our children, destroying the planet, and threatening the world’s most vulnerable citizens.

“We’re venturing into extremely dangerous territory by speaking of the future of food,” Prince Charles said in his keynote address. “Questioning the conventional world view is risky business.”

THE DETAILS: Prince Charles’ interest in organic farming dates back over 30 years, he said, to when he first realized that he needed to put his interest in healthy, sustainable food to some sort of action. In the 1980s, he decided to convert the Duchy Home Farm on one of the royal estates, Highgrove, to an organic agricultural system.

After a few years, the farm became productive enough to support a commercial food business he named Duchy Originals, and it now includes more than 200 organic meat, dairy, and packaged food products sold throughout the United Kingdom. The Prince has been a champion of sustainable food production ever since.

“We have to maintain a supply of healthy food when there is mounting pressure on every element affecting the farming process,” he told the crowd. “Soils are being depleted, demand for water is growing even more voracious, and our entire system is at the mercy of the increasingly fluctuating price of oil.”

According to one statistic he cited, the average person on a Western-style diet consumes a gallon of diesel every day through food, due to our current system’s heavy dependence on fossil fuel–dependent fertilizers, pesticides, and machinery.

In addition, world hunger and world food insecurity, which plague roughly 2 billion people, are made worse by the fact that industrial food systems being pushed upon farmers in developing countries have led to crop yields that, for the first time in history, are lower than the rate of population growth, he said.

WHAT IT MEANS: Organic farming will have to become the default means of feeding the world, he said. As economists, scientists, and farmers worldwide have been discovering, the Prince of Wales concurred that truly sustainable food systems based upon organic agricultural methods aren’t just required to feed the world, but they’re also required to maintain “economic biodiversity.”

“Imagine a global food shortage,” he said. “If it becomes harder to import food in today’s quantities, where do countries turn to for staple foods? If those foods are produced locally, such economic shocks to the system wouldn’t create such a panic.” He also used the example of bluefin tuna fisheries.

If sustainably managed, he said, fishermen would reap profits of $500 million per year, as opposed to the $70 million per year they’re currently making. “And that’s after $120 million in subsidies,” he added.

For that reason, we at The Therapy Book have been developing a phone app which will enable you to easily identify, in one swipe, which foods in UK supermarkets contain GM ingredients, or animals that are reared on GM feed.

At least that way, you and your family will have a choice about what you eat. And if we ‘vote with our wallets’, that may at least have some effect ~ the profit bottom line being the only language these sociopathic purveyors of Frankenfoods understand.

If you’d like to receive a free version of the phone app to test when it’s ready, please fill in this contact form.

To learn more about nutritional therapies, and other therapies, buy THE THERAPY BOOK. Just click on the book below:

Many thanks for Rodale.com for this story.