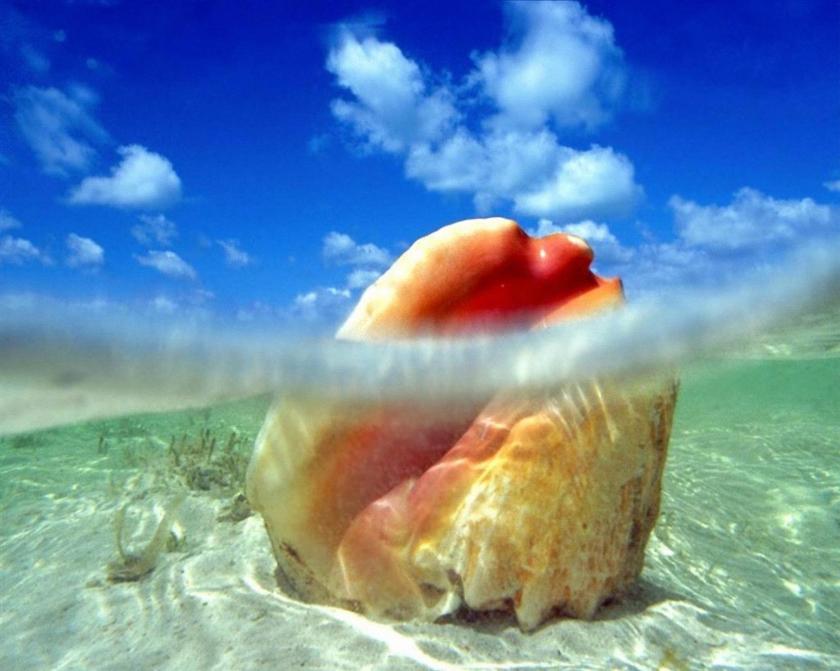 We all love to collect sea-shells on the sea-shore, and take them home to add to our collections. But there is so much more to the sea-shell than just mere decoration, beautiful though they are. Sound healer and synesthete Colin Kingshott can hear the sea-shells sing, albeit at a frequency that most of us are not aware of, consciously. Not only that, but Colin has found by examining the fossil records that shells, in the form of ammonites, appear to uniformly change their shape, at different stratas, in line with the changing of World Ages.

This sheds a new perspective on the stories contained in ancient myths worldwide about worlds ‘sung into being’ from primordial vibrations or resonance. For instance, we hear this in Vedic chant of The Thousand Names of Vishnu, an avatar that incarnates at the beginning of every new world age….

Your one hand wields the beautiful conch shell, of which only true fortunates are privileged to hear the divine sound.

You have radiance like the sun, a discus called Sudarshan in the other hand, which can slay the wicked and the demons in a trice.

Your third hand holds a heavy mace, which is ever ready to end the afflictions caused by physical, spiritual and mental afflictions.

And your fourth wields a lotus flower, which is capable of granting all the four kinds of rewards and material riches.

But the evidence for the healing and regenerative power of Nature through sea shells like spiralling conches doesn’t just come from mythology. Archaeologists have found ritual sites going back to the times of the Neanderthals which are packed with offerings of nautilus (spiral) shells.

Colin has created this image of the morphic (sound aura) field of the nautilus shell.

We’re also finding evidence for the sound healing practised by our earliest ancestors from their temples and labyrinthine ritual places, like the Lascaux caves in southern France with their wonderful paintings and carvings which are around 25,000 years old. The French anthropologist Iegor Reznikoff, who examined those caves in the Eighties, had a habit of humming, and so he quickly noticed the sound resonances of the ritual spaces in deep underground tunnels and caverns which, he said, were as good as that of any cathedral. After mapping several caves, he found that areas with the greatest resonance coincided with the greatest concentration of artworks.

In the underground network of tunnels and chambers at Chavin de de Huántar, a 3,000-year old ceremonial centre in the north-central sierra of Peru, researchers are discovering that its architectural and instrumental acoustics and psychoacoustics were used by conch-playing priests.

In 2001, Stanford anthropologist John Rick found conch-shell trumpets, called pututus, in one of the galleries at Chavin de de Huántar. The team set out to determine what role the horns played in ancient rituals and how the temple may have heightened their effects.

One of the Chavín pututus, Strombus galeatus (conch) shell trumpets.
Photos of artifacts from the collection of the Museo Nacional Chavín;

Archaeoacoustics researcher Miriam Kolar and her collaborators played computer-generated sounds to identify which frequencies the temple most readily transmits. Over years of experiments, they found that certain ducts enhanced the frequencies of the pututus while filtering out others, and that corridors amplified the trumpets’ sound.

“It suggests the architectural forms had a special relationship to how sound is transmitted,” said Miriam Kolar. She believes the combination of instrument and architecture may have been used to create a mystical experience, and is convinced that the totality of evidence—including carvings showing celebrants with eyes upturned and bodies shape-shifting into half-animal forms—indicates a spiritually shamanic intent.

So how does sound healing from sea shells work?

As discussed in The Healing of Serpents at Easter, healing is all about attuning oneself to the regenerative serpentine, spiralling energies of Nature and the universe. A number of scientists have tried to publish about this – from Carl Linnaeus (1707-1778) onwards – but their work is suppressed and ignored.

However, we can now discuss these things, and thankfully, it isn’t rocket science. If you look at these two images, it all becomes clear. The geometrical proportions of the spiralling shells are remarkably similar to the human ear.

Within the human ear is also the spiral cochlea, which is where we condense, tune and transduce all sound.

This excellent explanation for how sound heals via the cochlea comes from Owlmirror on Ishtar’s Gate forum.

“….the cross-section structure of the spiral ‘canal’ allows a circulation and recycling of the key chemical component that delivers cat-ionic charge to the neural network and manifests the voltage gradient through which this is made possible. In simple terms, the recycling happens at right angles to the direction of the canal and follows a radial pathway. This pathway describes an implosion/outrush vortex that completes its cycle and reconnects with itself through toroidal currents. To sum up in simplified terms, at every wavelength, along the length of the cochlea, a toroidal vortex converts sound waves into electrical impulses.”

With our two ears, we have the same sound healing geometry, like stereo speakers, on each side of our heads and we are, therefore, perfect receivers for the sound waves which the shells are emitting, whether we’re aware of the sound or not.

As I said in the opening paragraph, fossil hunters find that the shapes of the ammonites change according to the turning of the Wheel of Time, and so new World Ages spring into being through new and different songs from the shells as they slowly evolve into new and different geometrical shapes.

We modern humans are the descendants of Cro Magnum man, who appeared, it seems from the archaeological record, as if out of nowhere, around 43,000 years ago. It would be an interesting piece of work to discover whether there are any correlations between the shapes of the ammonites dated to before that time, and the shape of the cochleas of Homo erectus or the Neanderthals.

Colin Kingshott believes that the shells are gradually changing their shape now, as we move into a new World Age. Perhaps there’s no better time, then, to attune ourselves to the song of the sea-shells, so that we can follow their spiralling healing energies. Ultimately, healing is about being in tune with Nature and universal energies, and dis-ease only occurs when there is disharmony in that process. Check out our Colin’s sound healing sea products on The Holistic Health Store.

The Holistic Health Store is also totally unique in that we have developed and sourced many alternative health products you will probably have never seen before because they are so cutting edge and state-of-art and yet, at the same time, based on long-proven, ancient principles of healing, like sound healing.

From the song of the sea-shell to the harmonic resonance of the quartz in the standing stones at Stonehenge, synthesete Colin Kingshott has been tuning into the songs of Earth for most of his life. Now he has found a way to distill this natural healing into essences, sprays and spa products which we’re proud to be able to offer here under his range, Florachology.