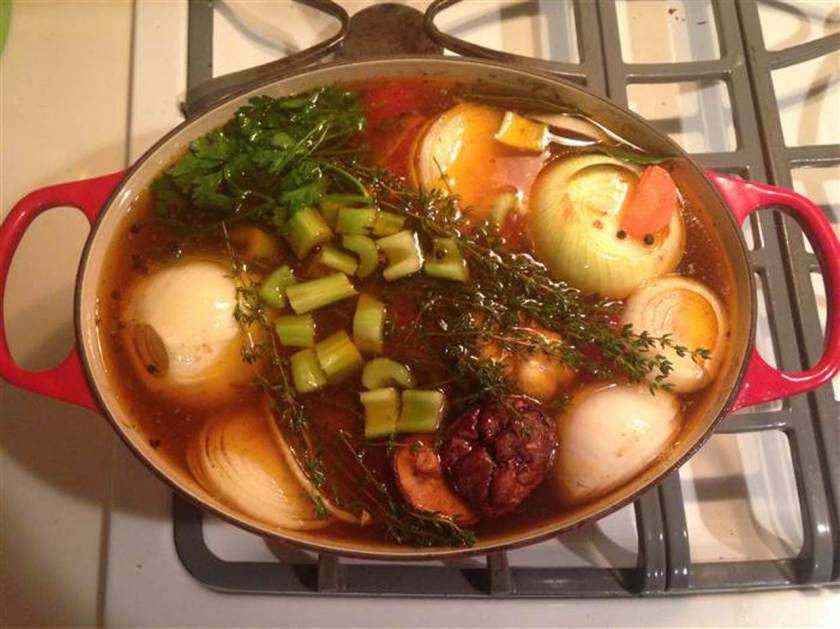 It’s ironic how we’ve been quite happily feeding bone marrow to our dogs to give them a bushy coat and shiny eyes without realising that it could do the same for us. The nutritional benefits of the holy marrow is now being rediscovered and if you find that people are describing it in magical or mystical terms, it’s because science hasn’t yet managed to identify every single constituent and trace element of bone marrow that makes us look and feel younger. We just know that it works.

I’ve recently been making my own beef marrow bone broth and that, along with an increased intake vitamin K2, has been creating new growth in my hair and my teeth – which is not bad going at aged 66.

My friend, Sandi, though, who’s only a few years younger than me, has had even more remarkable results. She’d been limping for the last couple of years with a painful knee that not even the chiropractor could put right. But after just a month or so on beef marrow bone broth, she’s now walking normally and with no pain.

I met up with Sandi – and she was looking amazing! – just after she’d returned from what would normally have been a gruelling freelance events assignment. She had had to walk about 12 kilometres a day, for four days, carrying heavy scenery around the grounds of a stately home. But she told me that she found it easy, and that the youngsters that she was training up were groaning and complaining because they couldn’t keep up with her.

The skin cells on her face looked plump and radiant, and her eyes were clear and shining. I think that her rejuvenated beauty could almost certainly be atttributed to the collagen in the bone broth, because over 24-48 hours of simmering bones in a slow cooker, the collagen breaks down to form gelatin: gelatin is well-known for creating healthy hair, skin and nails.

A quick word about slow cookers …

I’m very pleased with my oval-shaped electric slow cooker. It doesn’t dominate the whole hob, and I can set it on Low and leave it overnight, or for 48 hours. I can even go out and forgot about it and it will just happily bubble away. It is the VonShef and I got it from Amazon UK for £21.99 which I thought was quite reasonable.

If you’re in the US, Amazon there also has a good slow cooker which is comparable in price and quality called the Hamilton Beach 33660.

But what about Sandi’s knee?

Well, that’s easy to explain:  Damaged joints are often the result of inflammation in the body that has been caused by stress and a less-than-optimum diet. However, bone broth contains chondroitin sulfate and glucosamine – both of which have long been taken in supplement form by those who swear it helps with their aching joints.

In fact, you can probably forget about taking expensive multi-mineral supplements altogether if you’re drinking a cup of broth daily from the bones of grass-fed animals. It’s bursting with calcium, magnesium, phosphorus, silicon, sulphur and not only that but, unlike most over-the-counter supplements, they are in a form that your body can easily absorb. Plus bone broth contains a whole host of other trace elements and enzymes that are missing in the Standard American Diet.

On top of that, you can say goodbye to digestive disorders like Irritable Bowel Syndrome – otherwise known as ‘leaky gut’ – colitis and even Crohn’s disease, because the gelatin in the bone broth protects and heals the mucosal lining of the intestines and helps in the digestion of nutrients. In addition, bone broth is also rich in glycine and proline, which are important for good digestion and a healthy gut.

If you would like to learn more about how to make bone broth in three easy and quick lessons, just watch these three short videos.

Find grass-fed meat suppliers near you

Make sure you only use bones from animals fed on organic grass, and reared free of  antibiotics and GM feed, otherwise you will be absorbing  the toxic residues that the poor animal has stored in its bones. Get our app, Shop GMO-Free in the UK, to find local grass-fed meat and dairy suppliers near you.